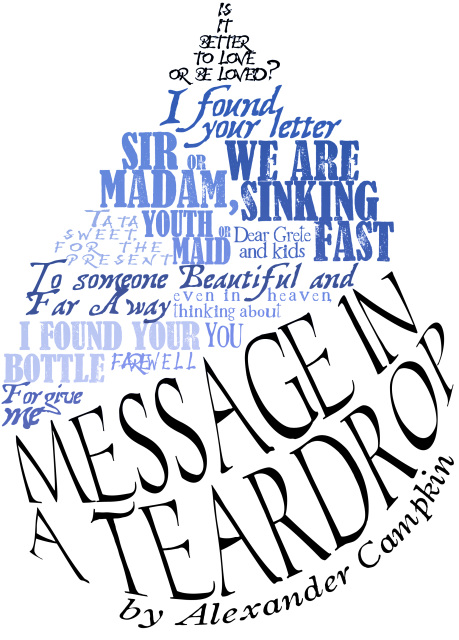 Message in a Teardrop

Message in a Teardrop was first performed by The Cantus Ensemble conducted by Dominic Brennan, in St Gabriel's Church, Pimlico, London; July 2016. The work was commissioned by John and Maggie King. Text adapted/translated from messages in bottles by Alexander Campkin.

Programme Note:
Every so often there is the extraordinary news that a message in bottle has washed up onshore. These letters, which may have travelled thousands of miles at the mercy of the sea over months, years or decades, form the text for my composition Message in a Teardrop. I have selected messages sent by people at poignant times in their lives. A British Private sailing to France in 1914 drops a letter to his wife into the sea and is killed days later; a mother bids her departed son farewell; a passenger on a sinking ocean liner torpedoed during the First World War asks for help; members of the German Air Force shot down in the North Sea ask their families for forgiveness. All were sent in love, and many were sent in desperation as a last hope. We are reading their final words. Searching for and translating these messages has been an emotional challenge. I hope to now take you on a powerful journey.